I love my FJ, and I believe it is one of the most comfortable, capable, and unique 4x4's on the market. However, I think Toyota could have done a better job of designing a few things. One of those being the rear window and how it opens, or lack thereof. I have been extremely jealous of other vehicles that have electronic opening rear windows.

I enjoy driving with my front windows rolled down, but since there isn’t anywhere for the incoming air to easily escape, it can feel a bit turbulent. If the weather is nice, I’ll manually open the rear window before leaving to allow better airflow.

Sometimes though, that can be a pain in the butt. Without fail, I’ll start the FJ, get inside, and then remember, or realize that I wanted the rear window open. Then, I find myself in a situation where I need to shut the FJ off, get out, and open the rear window with the key. If it starts raining while the rear window is open, then I have to stop, and close it. Usually, I just drive with the window closed because it’s easier and less of a hassle.

Luckily, Chitown4x4 has a solution for this. Joe created a powered rear window kit for all year FJ Cruisers. The actuator opens and closes the window and can be stopped at any desired position.

It is all controlled using a switch that can be mounted anywhere. The kit is powered using the supplied “add a fuse,” (wired into your fuse block under the knee panel) or you can run the wires directly to the battery. The kit also comes with a custom-made wiring harness and brackets to mount the actuator.

Upon first glance, this installation might seem a bit daunting, but once you get started, you soon realize it’s actually not that bad. The instructions are very detailed and make installation simple. Unfortunately, I don’t know exactly how long it took me from start to finish to install the powered rear window kit because I also had another project that I was working on while doing this.

If I had to guess, I would say it took about 8-10 hours for the installation. Keep in mind though, I have a two drawer cargo box in the rear storage area that needed to come out, and two cargo nets mounted on the rear door that needed to come off before I could start. The FJ was quite dirty, so I did a quick vacuum once I removed everything. Also, I am OCD when it comes to wiring, so that added some time. Those things combined, I’d say it added about two hours to the installation. 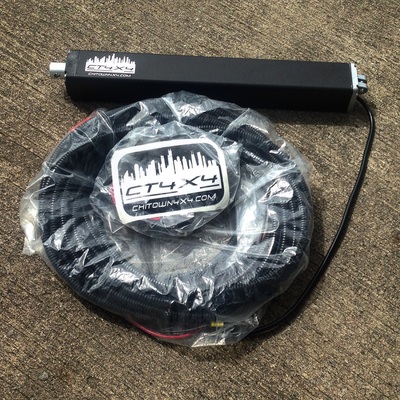 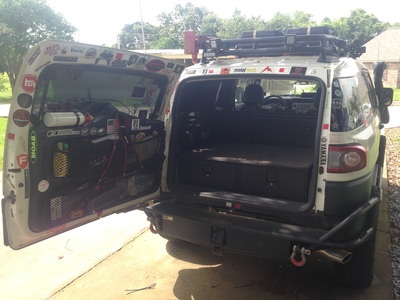 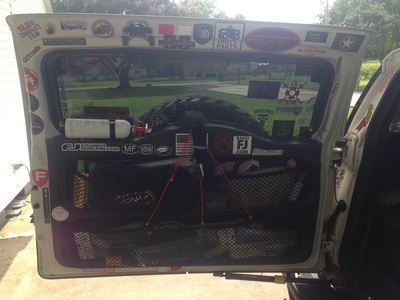 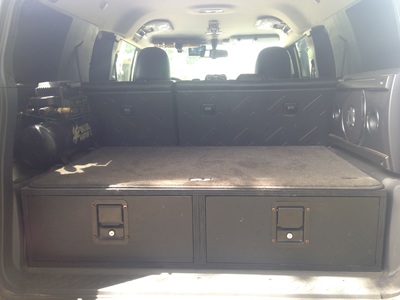 After removing my cargo box and cargo nets, I began removing the interior. I also removed the rear door panel. 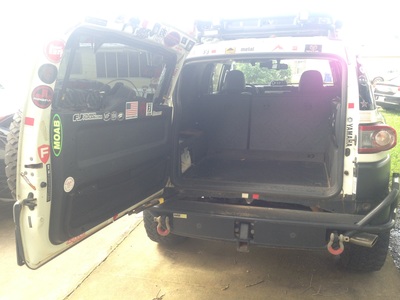 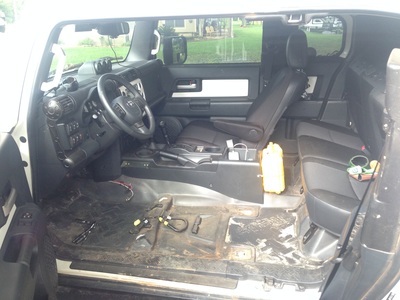 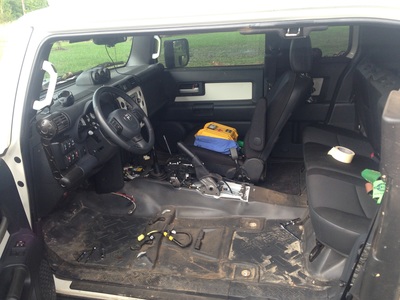 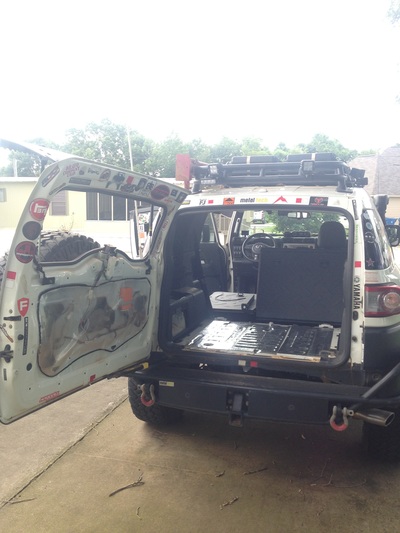 I pulled back the plastic vapor barrier on the rear door, and removed the left window strut to allow for installation of the actuator. 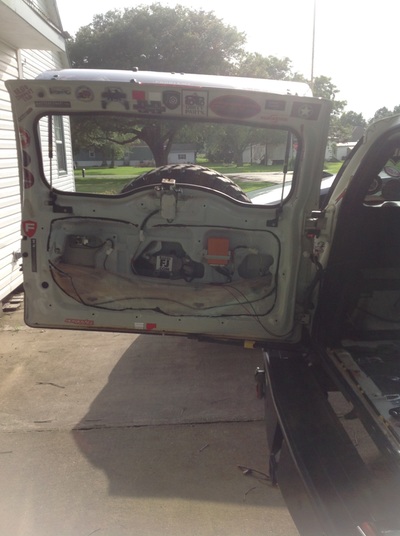 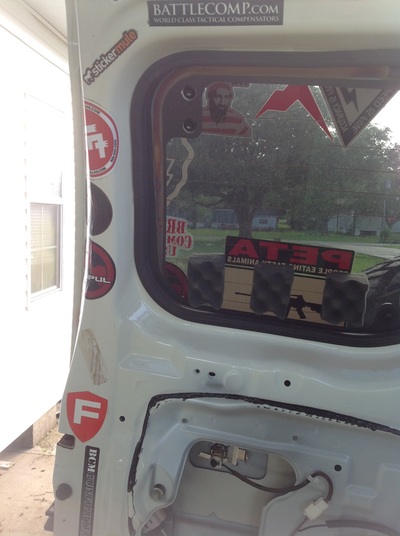 Most of the installation time for this kit is spent here: mounting the actuator, running the wire through the rear door, and removing the factory boot. I took my time to ensure that I did it correctly. Like I said earlier, I am OCD when it comes to wiring. I want it to look clean and professional, even if it is behind paneling and no one will see it.

Needless to say, acting like Rain Man with the wires added some time. 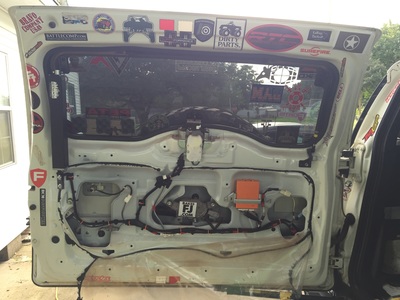 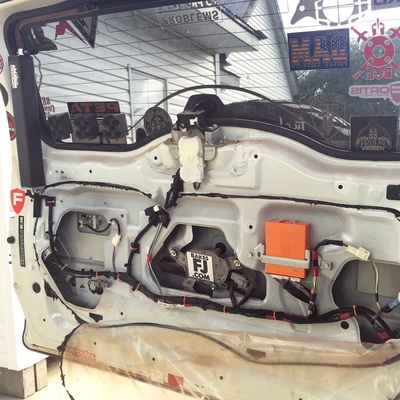 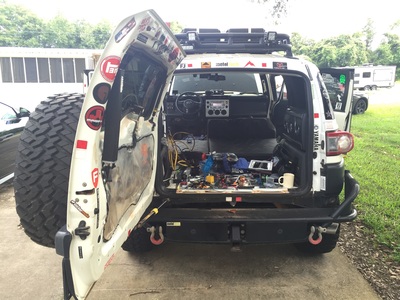 I decided to mount the window switch in the center switch panel. The switch is slightly larger than the factory spacing, so I enlarged it using a Dremel.

I removed the switch panel from the vehicle to make it easier to work with. This is not necessary, you can enlarge the space with the panel still in. I also needed to install two other switches for my rock light project, so the extra time needed to remove it was worth it in my opinion. 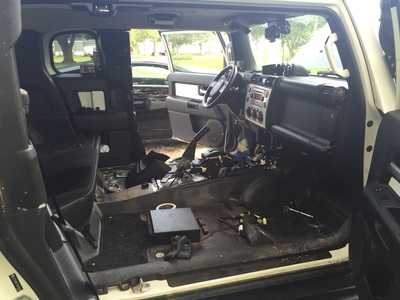 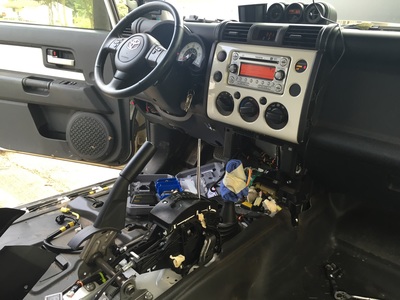 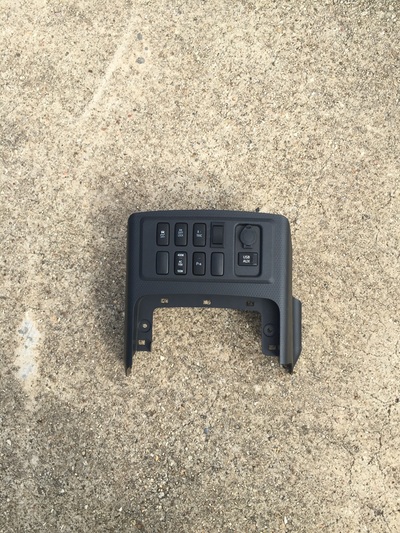 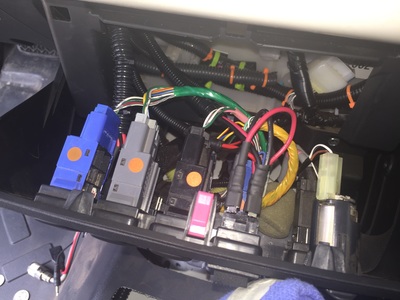 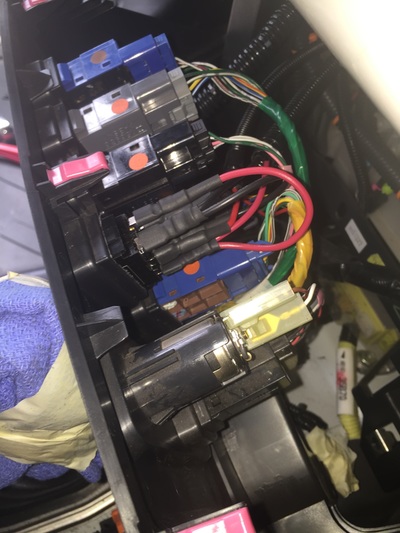 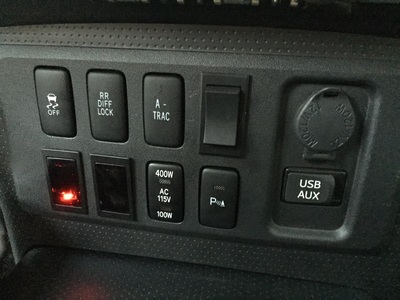 The kit comes with an “add a fuse,” so you can wire the kit into the fuse block under the knee panel. Doing it this way prevents you from having to run wire through the firewall and to your battery. It definitely saves some time and hassle.

Having said that, I decided to run the wire through my firewall and connect it to my Blue Sea fuse block. I have ran so much wire through there in the past, I have developed my own system so it doesn’t take me too long. 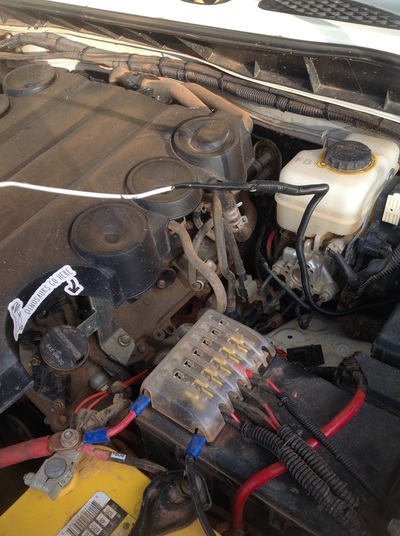 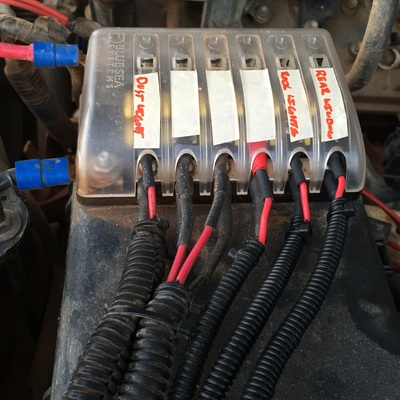 After getting everything cleaned up and re-installing the interior, the only thing left to do was mount the rear door panel. Due to the actuator being larger than the factory rear window strut, some trimming needed to be done on the door panel.

Like the instructions say, start with small cuts. It’s better to trim less than more. I eyed the initial cut and test fit the rear door panel after. I had to make several passes before the space was large enough to accommodate the actuator (window open).

Once the fit was right with the window open, I tested it with the window closed. Upon inspection, I realized the space needed to be larger. Reason being, the actuator moves slightly when opening and closing.

After another pass with the Dremel, it was finished. I cleaned up the edges of the space and placed black door trim on some of the edges, just to make it more aesthetically pleasing. 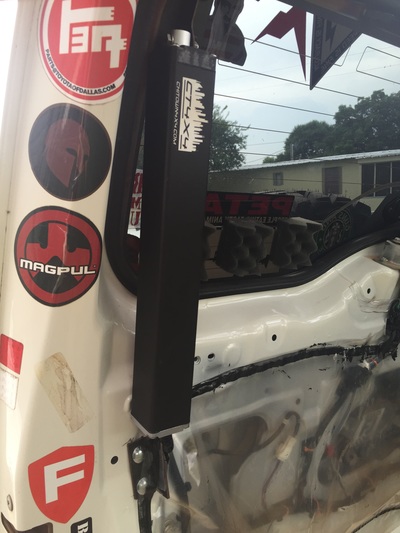 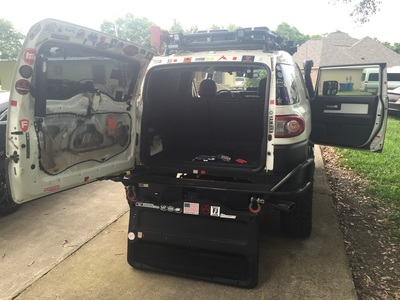 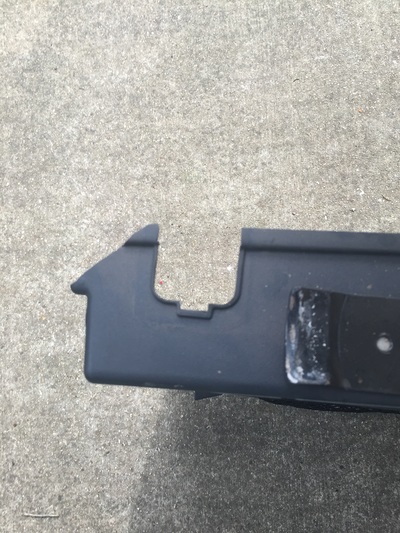 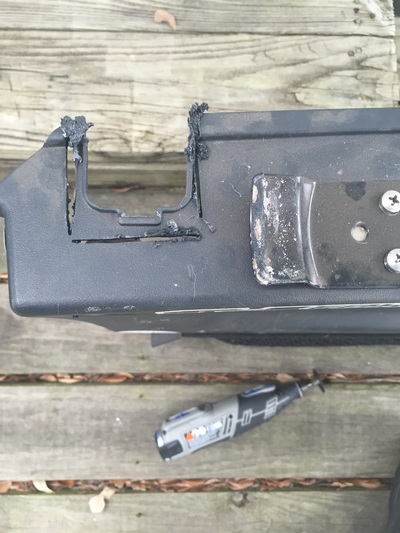 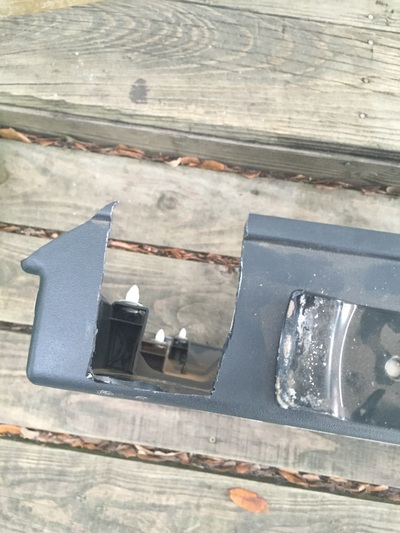 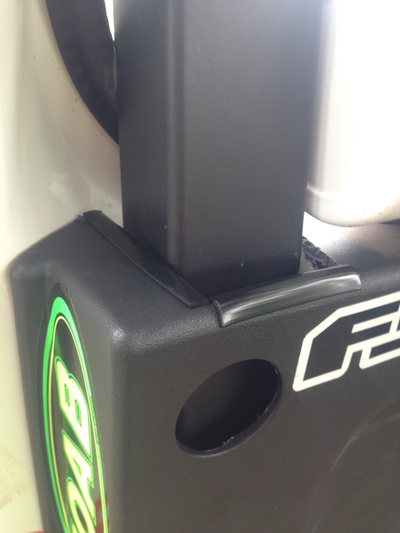 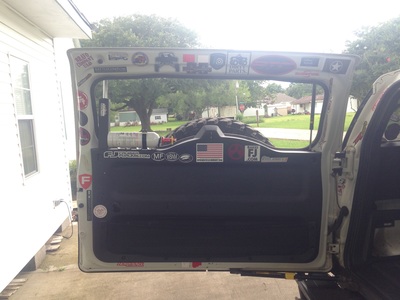 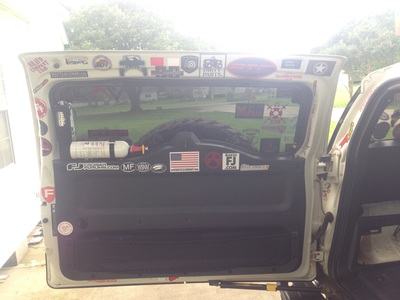 In my opinion, this kit is worth the time it takes to complete the install. I'm kicking myself for not doing this sooner. It is a very functional modification and make driving more enjoyable, not to mention, my 4 legged companion loves it! 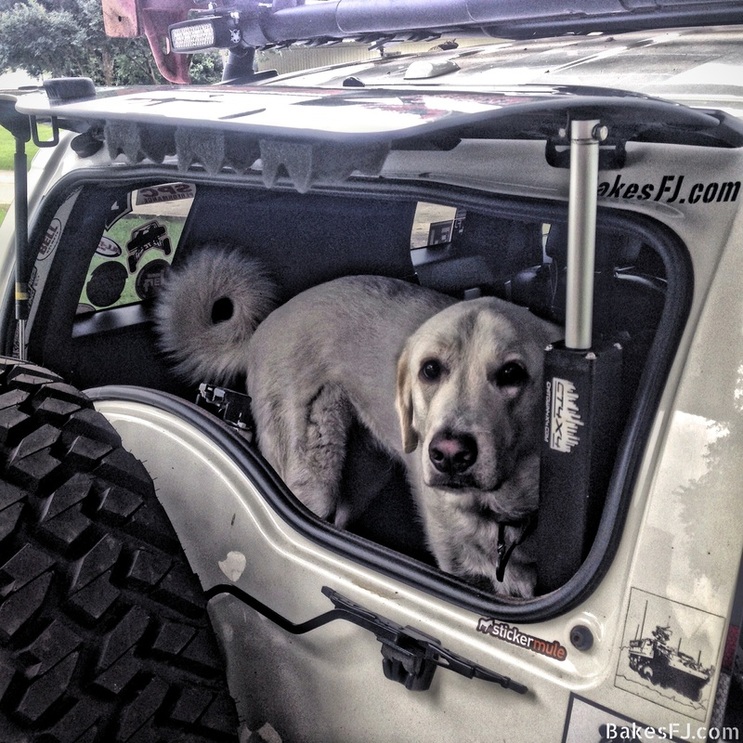 -To learn more about or purchase the Powered Rear Window Kit, please click on the link below﻿-﻿